The sun inches its way across the sky. Cornelius hunches underneath a rock arch, sheltered from the sun, studying a small symbol. His boots are filled with sand. The symbol looks like this: 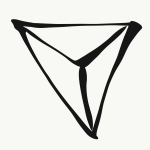 It is here we open the portal. The chief adept is behind the veil and casts with this symbol. When doing so, he shades all those he wants to protect. The entrance is closed and guarded.

Cornelius wipes his brow. He’s been out here for years. He’d initially recieved four weeks of funding for the dig, but the second they began they realized they’d need more time, more money, and more people. They hadn’t gotten any of that. Instead, most of his backers walked away when they saw the initial images of the site. He’s continued on by himself without the funding.

When he first started work on the site, Cornelius hoped to find some structures, maybe a cracked pot or two. Instead, he unearthed an entire ghost city. As he dug into the sand, spirit walls began to rise up, and before long, his crew were surrounded by an entire dead city, with ghost people going about their business as though Cornelius and his crew weren’t there.

As you’d expect, most of Cornelius’ workers fled at this point, and even those who stayed on only did so until the money ran out.

Cornelius stayed in the city, studying the people. Based on the ghost’s form, these were related to triangle people, though the architecture wasn’t consistent with what he’d seen before. Instead of the open dwellings he’d seen in the past, these structures were built into the hidden bedrock, as though their entire city was a massive igloo beneath the sand. He’d begun to refer to them as Cave Dwellers.

Writing in his journal in the opening months of research, Cornelius made this note:

They live as though I do not exist, and though I can see plainly they are ghosts—they are only half-visible and glow a subtle purple—they act as though they are still alive. Their city appears protected, linked by a series of symbols starting with a natural rock arch that marked our first dig. Is this ghost state that protection? Are they truly dead, and if so was there a cataclysmic event that lead to their current state?

It is unfortunate how wrong this man is, though we do hope to at least leave him with the correct conclusion by the end of all this, even if he himself won’t be able to share the information.

No matter how long I stay and watch, nothing changes. They do not acknowledge me. They weave baskets, practice their geometric magick, work the fields, and carry on as though everything is normal. On one hand, I am fascinated by the opportunity to see this culture behave as though it is alive, but on the other hand, I’m deeply disturbed by all this, though I can’t find the exact words for why that is.

Cornelius was able to study the Cave Dwellers for years because of one benefactor supplying him with just enough cashflow to sustain his research and himself. In that time, he collected years of notes, most of which is the type of indecipherable gibberish you’d expect from a man alone in the desert for six years.

Here’s the last thing he wrote in that time, in his own words, written six years after the initial dig:

I’ve written in this journal everyday, but I feel like today is the first time I can say I truly understand what I’m seeing. I’ve had a lot of theories over the years about the Cave Dwellers, that perhaps this was just a looped recording and if I stayed long enough I’d see it played out, or that it was all a hoax, brought on by some crazed artist looking to play the system. But ultimately, the answer appears to be the most obvious.

At some point in their past, the Cave Dwellers moved underground because of a civil war. Society simply failed. Their culture, which we’re all familiar with here in the present day, didn’t persist here. Instead, when they moved underground, they were slowly forgotten. And as the rest of the world forgot them, they began to disappear. Now, they carry on, only half visible to those of us staring right at them.

This is half true. We were indeed forgotten, but it was intentional. We wanted to be left behind. This was brought about by the opening of the portal, not as a result of the outsiders views.

I believe this because over the last six years, I’ve seen children grow up, I’ve seen parents age, and I’ve seen grandparents die. I’ve seen the family pet run off and never come home. I’ve seen farming accidents, illness, and style trends. This is not the behavior you expect from ghosts. In fact, it breaks every rule of ghosts we know. Therefore, this is not a ghost town, nor are these people ghosts. Ghosts do not age. They do not fall in and out of love. Ghosts are locked in the state they died in, unchangeable.

One day, I was able to read the text being written by a small boy.

We allowed him to do this because he was taking too long and we were a bit annoyed by his presence.

Usually, the text the Cave Dweller’s wrote, like the words they muttered, were beyond my perception. Yet for some reason, this one day, I was able to make out a sliver of text. It turned out to be an essay for school:

My family history, by Elliot

My mom and dad met during the spring festival and they decided to marry after that. They asked my grandma for permission and she said to ask the skull men because the skull men were still protecting us and when you marry you may have children and that means more people which means more protection. So mom and dad asked the skull men and they said okay. So they married and had me. Every Monday I go to see the skull men to give them blood but I don’t hate it because it doesn’t hurt anymore and mom says it’s a good thing for everyone here because it means I’m important. When I grow up I want to be a skull man too.

So, the skull people are here. Which means everything I do is suspect, and perhaps even the very nature of this entire set isn’t what it seems.

We have no idea what he knows about the skull people or why he’s invoking them here. It seems like they’ve managed to leave through our portals and are making their way through the rest of the world, which is unsettling and something we should look into. If this is the case, the Chief Adept will need to close the portal for good.

That is the last we hear from Cornelius. His notebook was found beneath the arch. By the time anyone else arrived, the Cave Dwellers had moved along. The symbol on the arch had changed: 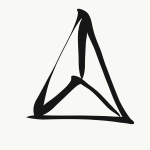 This symbol is written by a second adept and closes the portal. Portal members shift to the north to close the portal, angled at 5 degrees instead of six. The veil is salted, cleansed, and we return before we are ruined again. We have Cornelius here, he’s fine, but if the skull men are getting out we have no choice but to close up the portal and hope for the best. They seek chaos by any means, with no end goals.