I was told this would be an easier expedition, but as usual, that’s not correct. Funding was a mess and the location we were sent to was completely wrong. I’m sorry, I don’t mean to complain, but it’s been a frustrating month.

At first, we were sent to Bear Island, a small island inhabited only by bears. The bears were great hosts and my team made some friends for life, but it was clear the second we arrived that this was not the place we were supposed to be. The entire island was clearly on a map, making the job of a cartographer a bit pointless.

Once that was sorted, we made the crossing to the island we’d meant to go to, colloquially known as Bare Skull Island, officially known as Landmass #2324.

My crew is small, which I like. I’m not a great people manager and trying to wrangle 20 people to do even simple things, like take a group photo, is not my strong suit. People always assume the expedition leader is some sort of alpha type male—an Ernest Shackleton or Percy Fawcett or Daniel Boone—but I’m more of a Isabella Bird type. I’d rather just do the research and point to things as I need them.

This time, I brought along Octavio to handle most of cooking, camp and ship care and other sort of—I don’t know—management duties like that. He’s a curmudgeon, but he gets the work done and is always humming a tune. Maggie, my right hand soldier type who never leaves my side, rarely says a word, and fits the trope you’re already envisioning her as to a T. And finally Celeste, our biologist and resident nerd, who despite her gender is full of more dad-jokes than even the most mustachioed-New Balance-wearing-James Taylor-loving fathers out there. That’s it. Just the four of us, a JRPG party heading into the great unknown.

Bare Skull Island is located off the Eastern coast of the known RNN. It got its name because it’s sort of shaped like a skull, which you can see in our map. 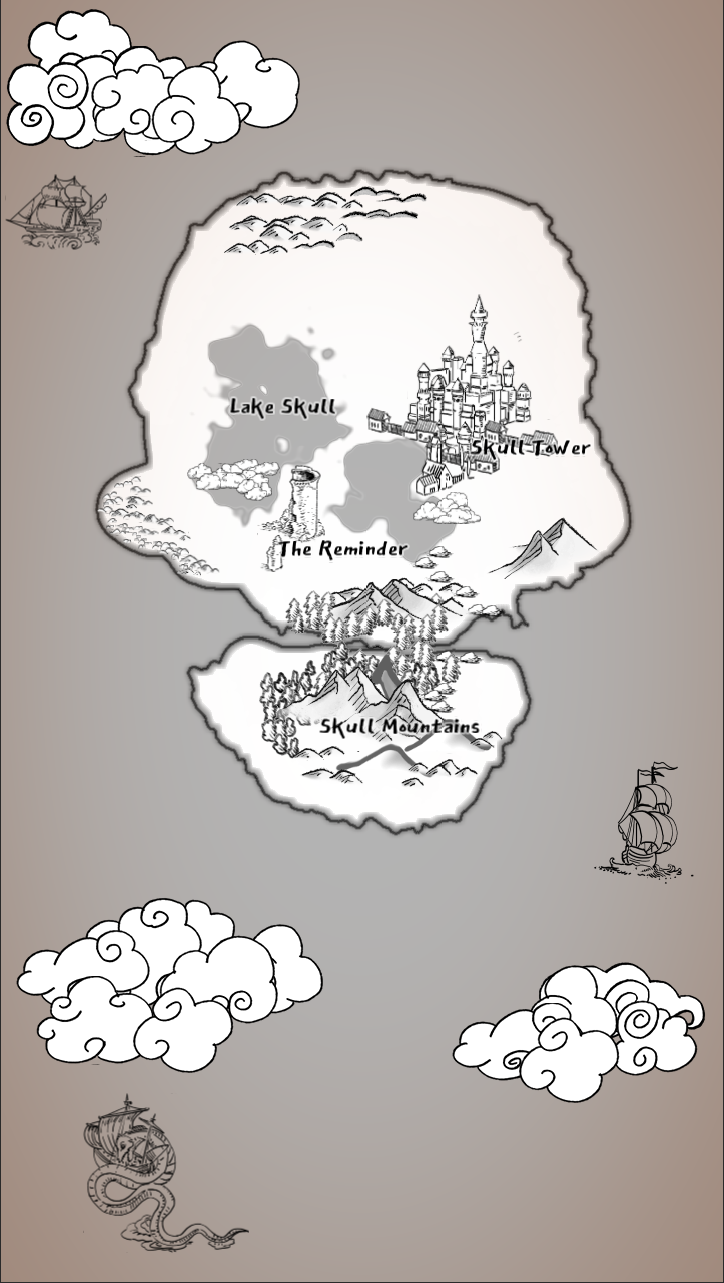 It was also the site of one of the biggest shipwrecks in RNN history. About 60 years ago, one of the first expeditions into the area was unfortunate enough to run into the island, killing most of the crew. Those who did survive weren’t able to sustain themselves on the islands meager resources and eventually died trying to escape. It’s this type of ghastly story that prevented it from being mapped. But here we are, on assignment, forced into this mess.

The deserted nature of the island—and the island being incapable of sustaining human life—is misleading though, so I should back up a bit. There is evidence of life here, lots of it. We have entire cities. And unlike most small islands, this isn’t a barren landscape. Well, it is now, but it wasn’t always. You can see where life once flourished here. There are forests and mountains, a small lake, and the ruins of of massive city.

I have a theory about this. I’m not going to include this in my official report, because it’s not really based on anything beyond a gut reaction, but I’ll lay it out here. I don’t think this was always an island. I think the skull men were here first, and they removed the rest of a landmass originally surrounding this area.

We had suspicions about skull men when we first got this assignment. “Maybe this is where they first came from,” Celeste said after we pulled up the first satellite maps featuring the crude skull outline of the island. We laughed at it then (okay “we” as in everyone except Maggie, anyway), but, well, I think she’s right. It’s so stupid to imagine they came from an island shaped like a skull, though.

Nobody knows much about the skull men. Despite the plural name, they’re usually solitary. But skull mans doesn’t really work. They also don’t have a gender. That didn’t stop Percy Humboldt from naming them skull men, though. To his credit, Humboldt tried to write around it, but couldn’t seem to come up with a reliable way to do so. They don’t seem evil, but they’re not exactly good. They do tend to create a bit of chaos, but they only seem to exist here in the RNN. Sinking a landmass around their own capital city isn’t the type of experiment we’ve seen them pull before, but I wouldn’t put it past them.

On our first night, we set up camp. Octavio cooked up burritos using a mishmash of freeze-dried foods. He’s a genius when it comes to camp cooking, though I do wish he could do his job without humming the same tune. Celeste had poked around the immediate campsite a bit, but was generally quiet, a rarity for her. Maggie, as usual, stood still, a sentry easily confused for a statue. I wrote my dispatches to the queen’s cartography department. Nothing to see here yet, everything is going well, yada yada.

In the morning we set out as a group of three, with Octavio staying behind to do whatever it is Octavio does when he stays behind. Within minutes we ran into what Celeste called Skull Tower (I refuse to call it that even though that’s what we labeled it on the map). I mean, within minutes. How did we not see this city from the camp? It made no sense. It made me feel stupid, like every step I’d taken leading up to this event was a stumble and eventually I would fall flat on my face.

The city was built in an architecture style I’d never seen before. It blended equal parts midcentury modern and medieval. The castle grounds felt like walking through a Disney film designed by Florence Knoll. The castle towers and wall were all simplified forms designed around modularity—you could see the patterns repeated throughout the rest of the city in different ways, from the cathedral to the individual houses. None of us are architects or even archeologists, but we all had the feeling we were seeing something new.

The most startling feature of the city was its lack of degradation. It looked brand new. Each building had no furniture, but also no dust. It felt like we were walking through a brand new tract house development. A ghost city not yet lived in.

As I plotted out the acreage of the town, making my little markings, daydreaming about the people who’d lived here—or perhaps would someday live here in some alternate future—the ground began to shake. It wasn’t an earthquake, I’d felt earthquakes before, it was more like, the sea level changed. I ran off, looking for Celeste and Maggie.

I spotted them standing on one of the castle’s towers, and I ran up the spiral staircase inside. “Did you feel that?” I asked, gasping for the air the spiral staircase had taken from me. “You betcha,” said Celeste, a massive grin on her face. “Look,” she pointed out toward our camp.

Where we’d originally set up a couple miles inland, the camp was now on beachfront property. Sure, we see tides come and go, but they don’t change the landscape of an island by miles. Had the ocean risen up or the island sunk slightly? Neither seems possible. The earth shook again, and the three of us watched the water recede back to to where it was when we arrived.

Celeste looked at me, a wild expression in her eyes, “Son of a beach! How cool was that?” Did I just see Maggie roll her eyes? I’m pretty sure she just rolled her eyes. “What the hell was that?” I asked, knowing nobody would have an answer, but being equally sure I need to say it.

“I have no idea,” replied Celeste, still staring out at the sea with an excited vibe pulsating around her entire body. In the distance, we could all hear Octavio cursing. “We should get back to camp,” I said.

A small robed figure stands in front of a large instrument panel. They pull a lever up and down. They stare at an extremely small screen, then pull the lever again. Faintly, gears grind. The figure sighs, then pulls the lever another time. More grinding. Finally, a satisfied nod accompanied by a light chuckle.